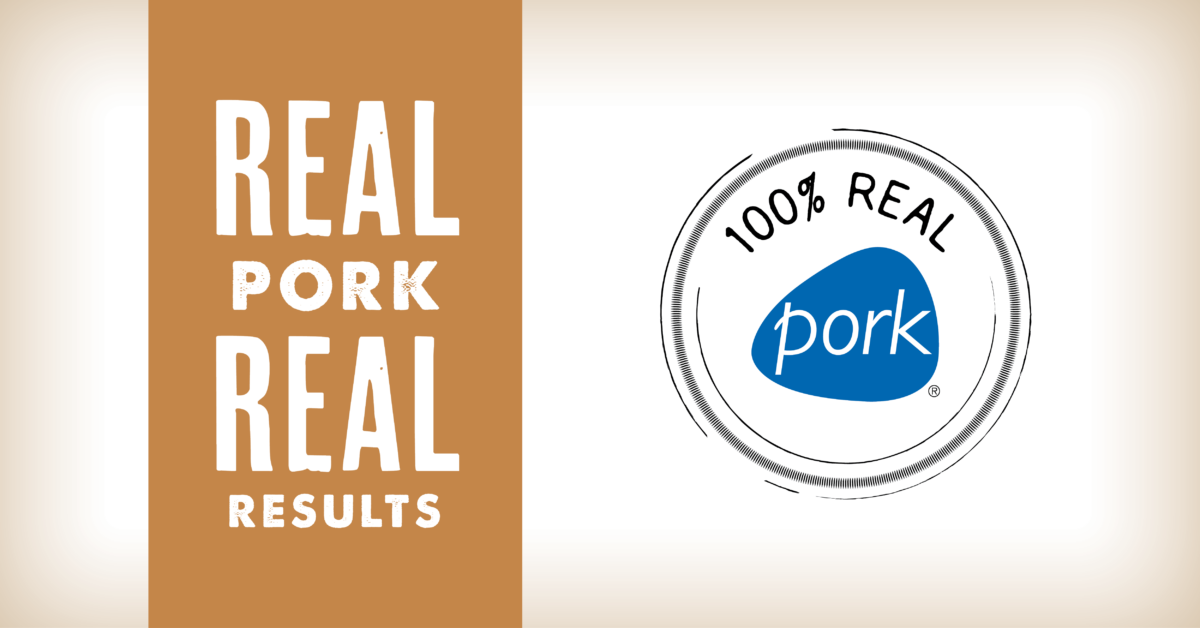 Real Pork is the industry’s trust and image brand — it's how we differentiate pork from alternatives. NPB has promoted Real Pork in three key areas this year.

Real Pork is about leading the conversation with consumers and growing its future.

Recognizing what’s real about pork helps the industry bust myths about pig production. It also conveys pig farmers’ commitment to sustainability and promotes the nutritional value and usability of pork.

More than ever, consumers are choosing food products that are both nutritious and sustainable. NPB’s mission is to demonstrate that pork is the most sustainably produced meat.

Doing so means having a plan to quantify on-farm practices and positive environmental outcomes through on-farm reports.

Among other important metrics, on-farm sustainability reports quantify the value and impact of manure application and adopting in-field practices — such as cover crop, no-till and reduced till practices.

* Based on 151 pork producer reports within the National Pork Board for the 2021 growing season and calendar year, collected and analyzed through October 25, 2022

Total savings of $8.6 million from manure application with the reduced need for commercial nitrogen, phosphorus and potassium.**

89,780 fewer tons of CO₂e (or carbon dioxide equivalents) from cover crop, no-till and reduced till practices – which is the equivalent of taking 17,433 average passenger cars off the road for a year.***

Jan Archer, a producer from Goldsboro, North Carolina, and NPB past president, uses the data from her on-farm sustainability report to make informed decisions on her operation.

“The on-farm report is an easy starting point,” she says. “We already collect the data, and we are all about the numbers. For my 1,200 sows, it only took an hour to fill out the paperwork.”

That hour of investment led to specific recommendations for her farm, some of which she’s already implemented.

“They’re a tool for profitability,” she says. “I love farming and it is fun to do, but it is not fun enough without a profit. Using all our resources in a smart way can improve our bottom line, our farm and our communities. It can keep our land and facilities in the family as we continue to cultivate progress. That’s generational sustainability.”

In the past six decades, pork production has improved* by using:

Request an on-farm sustainability report for your operation today.

Together, the industry can build trust in and add value to pork for those who buy it – and build a better future for those who produce it.

Driving Consumers to a Higher Ground

A Pork Checkoff-funded project designed to create value for ground pork in grocery stores positioned pork as an everyday item to be used as an ingredient in recipes. The initial test-and-learn project was a collaboration between NPB and eight state pork associations.

There were three goals of the project:

This work grew sales in the test stores by 19%.2 NPB is continuing to partner with multiple leading retailers to increase ground pork presence.

This year, ground pork is on track to outpace 2019 sales. Year-to-date data shows it’s already ahead of 2019 sales by 34%,3 indicating ground pork has found its way to new consumers and there are new ways to enjoy it at mealtime.

This work also shifted the placement of plant-based alternatives outside of the meat case.

To aid in this effort, six new unique recipes were created and can be found at pork.org:

Getting the Word Out about Pork

Last year, a Pork Checkoff-funded study revealed nearly one-third of consumers said they had either reduced or planned to reduce their consumption of pork.4

Their reasons for doing so included concerns about nutrition, safety and ethics of raising pigs.

To address those concerns, NPB developed the 2021 Mythbusting campaign – featuring five Rural Dictionary videos – that reached 16 million consumers explaining how real pork is raised. Those who saw the content had a 50% greater favorability toward pork, and more than a third (34%) said they planned to increase pork consumption.5

To build upon the success of its 2021 Mythbusting campaign, NPB is working with country music star Luke Bryan for what’s described as “Mythbusting 2.0.”

Raised on a family farm in rural Georgia, Luke appreciates agriculture and knows how hard farm families work. Clearing up the misconceptions about farming is personal to him. His likable, trustworthy appeal to the meat-reducing consumer allows NPB to cast a significantly wider net and authentically deliver the Mythbusting message to those who need to hear it most.

Participants thought they were being interviewed about a five-star hotel with physician services, personalized nutrition plans and extensively trained staff.

Instead, they were hearing about everyday standards and protocols of modern pig farming.

Hidden-camera video captured the surprised reactions of the focus group participants as footage of a pig farm was cast upon the walls surrounding them, revealing the true topic of the day.

Before entering campaign content production, NPB tested the creative idea with real focus groups to validate the approach of using a hotel as a metaphor for pork production.

You’ve heard the buzz about sustainable agriculture. For pork production, that means doing what’s right for people, pigs and the planet.

Request an on-farm sustainability report for your operation and take credit for work you’re already doing.

To date, more than 300 operations representing 2 million pigs have enrolled.